I preached the sermon below this afternoon in the Providence Seminary chapel as part of the ongoing sermon series “Christ and the Pandemic.”  The Scriptural text for my message was 1 Corinthians 15:1-11. END_OF_DOCUMENT_TOKEN_TO_BE_REPLACED

Michael Gorman, a New Testament scholar whose work I have found to be both insightful and refreshing, has recently published a fictional letter from the Apostle Paul to Christians in the United States in the Christian Century.  I heard Gorman present an earlier version of this letter during an address at a theological conference at Northeastern University in Rochester, NY, a couple of years ago, which was subsequently published in the Canadian Theological Review.  It is well worth the read.  I will be incorporating it into my upcoming Christian Ethics course.  You can access it here.

This is the fourth in a series of posts engaging with Matthew Bates’s Salvation by Allegiance Alone.  The earlier posts can be read here:  first, second, third.

In chapter 3, “Jesus Proclaims the Gospel,” Bates turns to confronting a longstanding problem in modern Protestant Christianity:  the reconciliation of the Letters of Paul with the Gospels.1  The writings of Paul have long been a haven for certain forms of Lutheranism and conservative evangelicalism espousing the centrality of a particular understanding of justification by faith.  While the Gospels have often been the playground of some liberal forms of Christianity attempting to advance a social agenda based upon ethical principles.  The irony is that in their readings of their respective canons-within-a-canon both groups have lost sight of the animating center of the canon as a whole, as well as Paul’s Letters and the Gospels in particular, namely the crucified and living Lord Jesus Christ. END_OF_DOCUMENT_TOKEN_TO_BE_REPLACED

Earlier in the summer I had the privilege of preaching at the mid-week community chapel at Tyndale University College and Seminary.  The primary text for my sermon was the account of the apostle Paul’s visit to Athens found in Acts 17:16-34.  The sermon was entitled, “An Earthquake of Heaven, An Earthquake of Love.”  If you are interested in hearing the sermon, it is available for download or streaming through the Tyndale Chapel website.

This is the fifteenth in a series of posts engaging with the sermons in Leaps of Faith: Sermons from the Edge.  This post is a reflection upon an Easter sermon entitled “Body Odor” (pp. 43-49). The Scriptural texts for the sermon were 2 Corinthians 2:14-3:6 and Numbers 28:1-15. END_OF_DOCUMENT_TOKEN_TO_BE_REPLACED 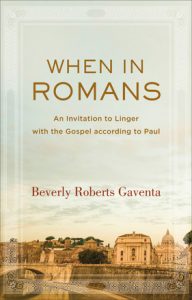 An upcoming opportunity to preach on a passage from the book of Romans provided me with a convenient excuse to dive into Beverly Roberts Gaventa’s new book, When in Romans: An Invitation to Linger with the Gospel according to Paul.  In addition to being one of the most cleverly titled books I’ve come across in some time, the book confirms Gaventa’s place in the rare company of biblical scholars whose writing demonstrates theological sensibilities and is at the same time accessible to pastors and laypeople.  (I would also place Richard Hays and Michael Gorman, among others, in this category.)  Gaventa is clearly informed of the most recent scholarly debates, as evidenced in the endnotes, but she wears her learning lightly.  Her lucid prose is peppered with references to contemporary culture, including, for example, a discussion of Terrence Malick’s film, The Tree of Life. END_OF_DOCUMENT_TOKEN_TO_BE_REPLACED