The most recent book from Stanley Hauerwas, The Character of Virtue: Letters to a Godson, consists of letters that the theologian annually sent to his godson, Laurie Wells, over a fifteen year period marking the anniversary of Wells’s baptism.  Each of the letters addresses a virtue that is important for the Christian life.  As a result, the book can be read as an engaging entry point into and accessible distillation of Hauerwas’s forty plus years of prodigious scholarship and writing.  The book, which seems ideally situated to become a classic, also contains an eloquent introduction by one of Hauerwas’s most insightful interpreters, who also happens to be the father of the recipient of the letters, the pastor-theologian Sam Wells.  One of my favourite passages involves a discussion of the training in patience that is baseball. END_OF_DOCUMENT_TOKEN_TO_BE_REPLACED

This is the fourth in a series of posts engaging with Matthew Bates’s Salvation by Allegiance Alone.  The earlier posts can be read here:  first, second, third.

In chapter 3, “Jesus Proclaims the Gospel,” Bates turns to confronting a longstanding problem in modern Protestant Christianity:  the reconciliation of the Letters of Paul with the Gospels.1  The writings of Paul have long been a haven for certain forms of Lutheranism and conservative evangelicalism espousing the centrality of a particular understanding of justification by faith.  While the Gospels have often been the playground of some liberal forms of Christianity attempting to advance a social agenda based upon ethical principles.  The irony is that in their readings of their respective canons-within-a-canon both groups have lost sight of the animating center of the canon as a whole, as well as Paul’s Letters and the Gospels in particular, namely the crucified and living Lord Jesus Christ. END_OF_DOCUMENT_TOKEN_TO_BE_REPLACED

The forthcoming issue of the Canadian theological journal Didaskalia, published by Providence Theological Seminary, includes both a gracious review of my book For the Life of the World: Jesus Christ and the Church in the Theologies of Dietrich Bonhoeffer and Stanley Hauerwas by Christopher Holmes and an essay of my own entitled, “A Matter of MIssion: Bonhoeffer, the Bible, and Ecclesial Formation.” END_OF_DOCUMENT_TOKEN_TO_BE_REPLACED

This is the third in a series of posts engaging with Matthew Bates’s Salvation by Allegiance Alone.  The earlier posts can be read here and here.

The second chapter of Salvation by Allegiance Alone is entitled, “Loyalty and the Full Gospel.”  It could have just as easily been titled, “Your Gospel Is Too Small!” or perhaps even, “Your Gospel Is Too Small and Its Skewed in the Wrong Direction!”  These would be appropriate titles because Bates is convinced that the predominant contemporary North American understandings of the Christian faith have both truncated the scope and lost sight of the focal point of the Gospel. END_OF_DOCUMENT_TOKEN_TO_BE_REPLACED

This is the second in a series of posts engaging with Matthew Bates’s Salvation by Allegiance Alone.  The inaugural post can be read here.

The first chapter of Salvation by Allegiance Alone, entitled “Faith Is Not” is Bates’s attempt to clean the deck of the good ship of the church by scraping off the various layers of mold and sediment that have accumulated over the centuries on top of the planks of the gospel, faith, and the Christian life. END_OF_DOCUMENT_TOKEN_TO_BE_REPLACED 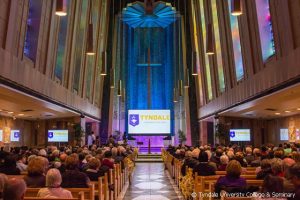 For anyone who happens to be in the north part of Toronto this coming Wednesday morning, I will be preaching at the Tyndale University College and Seminary Chapel.  The service begins at 11:15 am and is open to the public.