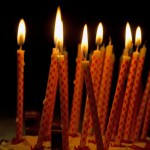 The Lutheran theologian Robert Jenson once published a delightful collection of theological conversations he had with his eight-year old granddaughter, entitled, Conversations with Poppi about God. While I may lack Jenson’s great erudition, my five-year old daughter certainly has no problem supplying the type of questions and comments that make for “book-worthy” theological conversation. (See, for example her question in the Advent sermon previously posted.) Her most recent question was raised the other day as we were driving home from a church Christmas event.

“Christmas is Jesus’ birthday, right?” a voice piped up from the back seat. “What is Jesus going to be this year?”

While those of us who have passed a certain age may wish to stop counting their birthdays, it is of supreme importance to a child to know what age someone is turning on their birthday. However, answering the question of which birthday Jesus celebrated on Christmas Day is far from straightforward.

In good Nicene fashion we could say that Jesus is the second person of the Trinity and that the incarnation is the result of an eternal decision (e.g., 1 Pet 1:20, Rev 13:8). Therefore, in some sense we could say that we can’t really ascribe any sort of age to Jesus. Jesus is the Word and the Word was with God in the beginning (John 1:1-2). This is good as far as it goes, but it doesn’t quite square with the story itself as it is presented to us in the New Testament.

The incarnation may be the result of an eternal decision, but it has a specific temporal outcome (I owe this way of putting that matter to David Yeago’s yet-to-be-published systematic theology textbook) – namely the angel Gabriel appeared to Mary and sometime later a child was born in Bethlehem. Jesus does, in fact, have a birthday. To say otherwise would be to deny the saving reality of the incarnation. So we’ll have to look for another solution to our problem.

The most obvious answer, and the one I was tempted to give in the car, is that Jesus turned 2015 this year. (I have no particular stake in the debates surrounding the exact dating of Jesus’ birth. If one wanted to say that Jesus turned 2021, 2018, or 2012 this year, he or she would still be employing the same line of reasoning as one arguing for 2015.) There is something right about this answer. “The Word became flesh and made his dwelling among us” (John 1:14) – Jesus does have a birthday (even if we are not entirely sure of its exact date). Furthermore, Jesus has ascended into heaven taking his humanity with Him. It is as a human being that Jesus intercedes for us at the right hand of the Father. The difficulty with the answer 2015 hinges on the nature of the resurrection. In our frail and fallen existence our aging is always an aging towards death. If Jesus was merely resuscitated after having died, then we could continue to count his birthdays as we do our own. But this is not what the Christian tradition means when it speaks of resurrection. Thomas Aquinas makes a helpful distinction between resuscitation and resurrection:

“One sort of resurrection would be resurrection only from actual death, so that someone began again to live after having died. Another sort would be that someone was freed not only from death but even from . . . the possibility of dying. Only the latter is authentic resurrection.” (Thomas Aquinas, Summa Theologiae, iii.53.3)

Jesus, in his resurrection, has entered into the fullness of the age to come. He has left behind the death-determined form of temporality to which we are accustomed. So the response that Jesus is turning 2015, doesn’t quite seem to cut it either.

Another possible attempt to answer the question might draw upon the work of theologians of the Middle Ages who concerned themselves with the question of what age people will appear as in the new heavens and the new earth. Alister McGrath suggests that by the end of the 13th century a general consensus had emerged that “the New Jerusalem will thus be populated by men and women as they would appear at the age of 30, but with every blemish removed” (Christian Theology, 463). At that time, human beings were generally regarded to reach the height of their powers at the age of thirty. This impression was further cemented by the fact that Jesus was approximately 30 at the time of his crucifixion. Perhaps then we could say that Jesus is turning 33 this year for the 1982nd time!

Perhaps, the true fruit of this theological exercise is the reminder that it only takes the simple question of a child to unmask our pretensions. When it comes to speaking of God, we will never be “Masters of Divinity,” but always and ever mere apprentices. But speak we must, for “the Word became flesh and made his dwelling among us” (John 1:14). “Love came down at Christmas,” (Christina Rossetti) and the glorious condescension of this “Love all lovely, Love divine” is the mystery of our salvation.

One thought on “A Christmas Conundrum”