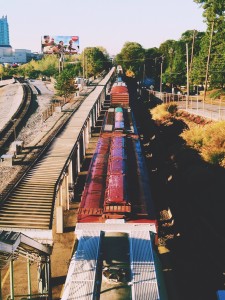 In his posthumously published collection of lectures, Theology of Mission, John Howard Yoder introduces an interesting analogy to differentiate between communication that is truly evangelical, as opposed to that which is simply manipulative.  The former, which he describes as proclamation, begins from a theological starting point.  The latter, which he describes as persuasion, starts from an anthropological starting point.  Yoder introduces the analogy of a train compared to a taxi in an attempt to introduce the difference between these two modes of speech.  As someone raised on the music of Johnny Cash, I’m probably partial to the suggestion that “the kingdom is more like a train,” but I’ll leave it to you to draw your own conclusions.  Here’s the quote:

“The figure of speech that I use to illustrate this is the difference between the train and the taxi. The taxi will not go somewhere unless a person wants to go and pays for it. The taxi is on the client’s schedule. If the taxi driver contributes at all to the decision about whether to go, it is by inviting the passenger to make the trip and saying that the rider would be happy when they get there or that the driver will get them there more cheaply, safely or quickly than somebody else. The individual’s decision, however, is what determines whether the trip will be made and what the destination is, even whether the taxi will run. By contrast, when a train leaves depends on the schedule, not on any passenger’s choice. Where the train will go depends on a combination of the schedule and the tracks. There is objectivity and reliability, a fitting into a plan that does not depend on any given passenger. Whether somebody gets on the train is completely his or her decision. But if somebody does not get on, they do not go anywhere. Moreover, what constitutes the destination does not depend on them at all.

Think of that difference as it relates to evangelism. Modern Western evangelism says, ‘Won’t you please get on so I can have a fare? Because I have to make my living running this taxi.’ Kingdom of God proclamation says, ‘This train is bound for glory. Get on or get left.’ The objectivity, the fact that the train is going to leave without us if we do not get on, the fact that the kingdom is coming whether we want it or not, is the way of the kingdom whether we like it or not. As it happens, we will find that it is a good trip. But whether the conductor gets paid does not depend on whether we get on. The train is simply going. The kingdom is not a taxi. The kingdom is more like a train.” – John Howard Yoder, Theology of Mission: A Believers Church Perspective, ed. Gayle Gerber Koontz and Andy Alexis-Baker (Downers Grove: IVP Academic, 2014), 109-110.

3 thoughts on “Persuasion vs. Proclamation”